This picture is Stephen & Mary Hanik (from Salado) being filmed by Christian Wohlfhart of KNCT TV.  Mr. Wolfhart produced a film about the Texas wineries called, “A Journey In Every Glass”.  We’re going to host a special public screening of the documentary on Saturday, September 5 at 7pm.

Christian spent a considerable amount of time documenting my vineyard this spring, and filming harvest.  Unlike other media who visit us, he even helped harvest!  He then followed the grapes on their journey to Red Caboose Winery.

This documentary was produced by a local PBS station, KNCT.  They explored the Central Texas’ wine industry via visits to area wineries.  While filming, they helped us pick chardonnay grapes.  This is the only time I remember the media actually getting involved and picking, so I hope the show is a great success!

The show will premiere at 7 pm on Tuesday, September1, 2009 and it is  entitled “A Journey In Every Glass” .   If you are in the Central Texas viewing area (Killeen, Temple, Waco) you can watch the program on KNCT TV.

This program will help promote the annual KNCT Wine Classic fundraiser in January, so I’m sure it will be played again.  Check your local listings! 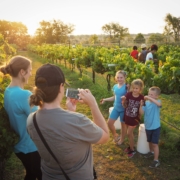