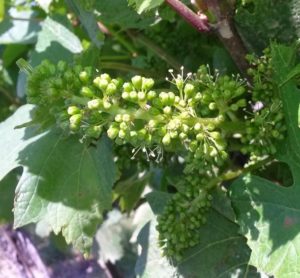 sex in the vineyard

I admit it, I am just trying to get your attention.  The sex I am referring to is the procreation of baby grapes.  Bloom has started.  What does that mean?  Let me copy from Ed Hellman on the Agrilife Extension page:

The grape flower does not have conspicuous petals, instead, the petals are fused into a green structure termed the calyptra, but commonly referred to as the cap. The cap encloses the reproductive organs and other tissues within the flower. A flower consists of a single pistil (female organ) and fivestamens, each tipped with an anther (male organ). The pistil is roughly conical in shape, with the base disproportionately larger than the top, and the tip (called the stigma) slightly flared. The broad base of the pistil is the ovary, and it consists of two internal compartments, each having two ovules containing an embryo sac with a single egg. The anthers produce many yellow pollen grains, which contain the sperm. Wild grapevines, rootstocks (and a few cultivated varieties such as St. Pepin) have either pistillate (female) or staminate male flowers — that is, the entire vine is either male or female. Vines with female, pistillate flowers need nearby vines with staminate or perfect flowers to produce fruit. The majority of commercial grapevine varieties have perfect flowers, that is, both male and female components.

An individual grape flower is shown with floral parts labeled.

The period of time during which flowers are open (the calyptra has fallen) is calledbloom (also flowering or anthesis), and can last from 1 to 3 weeks depending on weather conditions. Viticulturists variously refer to full bloom as the stage at which either approximately 50% or two-thirds of the capshave loosened or fallen from the flowers. Bloom typically occurs between 50 and 80 days after budburst.

Picture with grape parts labeled also from “Parts of the Grape Vine: Flowers and Fruit” by Ed Hellman on the Agrilife Extension website 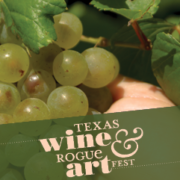