You’re invited to an art opening reception for Stephen King, abstract artist residing in Central Texas. His bold colorful art was chosen for Salado Winery just in time for summer.

Mr. King’s art will remain on display through August 2019.

“After all the negative that has become so much a part of our world, I hope you will look at my paintings, and let them remind you of good times and special places of the heart. Perhaps you will recall driving along a dirt road headed for your grandparents home or maybe just a family camp out by the river. Or you may simply remember sitting on the porch, watching a sunset, or even a rainstorm approaching as evening begins. Hopefully, at the end of a long day, a look at your painting reminds you once more of God’s creation and the sheer wonder of it all. And you are made glad”.–Patty Thomas

Ms. Thomas’s work will be on display until 5/5/2019. Contact Ms. Thomas at https://pattythomasfineart.com/

Y’all are invited to join in on this yummy goodness!

Macarons by Maison de Macarons paired with wines made by Salado Winery.

First, show up and check in by 7 pm

Second, sit back and enjoy the presentation by the macaron baker and the wine maker, both local gals who live in Central Texas and share a passion for all things French.

Third, nibble and sip your way through the pairings

Ahhh! those little pretty desserts. Did you know they are naturally gluten free? What a coincidence, so is wine! As if anyone ever needed an excuse to enjoy their Friday evening? Come on now, stop thinking about it. If you wait too long, someone else might buy your ticket….see you soon! A bientot!

following the wine and macaron tasting, stay and enjoy a glass of wine with your friends, or explore Salado RAW or Salado’s 4th Friday

Things To Do In Salado, TX Class Food & Drink

Friday, July  8th from 6:00 p.m. until 10:00 p.m. the Salado Chamber of Commerce/Tourism Bureau will host its annual Salado Swirl. Experience and enjoy the wine offerings as you see, sniff, swirl, sniff, sip and savor! Stops will have wine and food offerings that are pleasing to all culinary palettes. Trolley transportation is available between stops.

Looking for a place to stay afterwards?  Salado lodging, great eats, and more are listed at www.salado.com 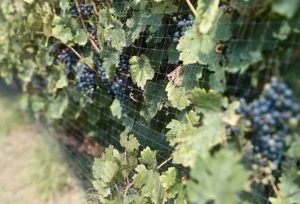 notice the sprinkling of green grapes

The most important wine making decision is “when to harvest?”

At this point we have harvested 75% of the vineyard.  All that remains is the cabernet sauvingnon.  I went out and took a random sample yesterday, and what did I get?  Well, by the #’s, it looks fantastic!  Brix 24 degrees and pH 3.76, woohoo!

But, the truth is that about 15% of the grapes are still green, and that is no good for the quality wine we make at Salado Winery.  The photo with this post was taken on August 12, 2015.  The weather is not going to change much in the next 10 days, so?

So when will it be ready?  Well I am hoping for Saturday the 22nd.  I am trying to keep an eye on the pH, which will rise quickly, because I don’t want it to go sky-high.

I had this problem in 2013, and I compensated for a little under ripeness by blending with the 2012.  Another common technique is to use delestage to remove green seeds before they add any stringency.

Check back for an update next week! 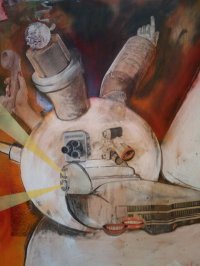 Art Opening Reception with John Davis.
Chat with the artist and view his work!
Gourmet food and wine tastings, including barrel tastings of our newest releases.
Special appearance by gnomadic fashion truck!

Buy your tickets now for the 2015 Salado Swirl! This is an 11-stop wine trail throughout Salado with wine and snacks at each stop. Shops will be open late for this fun evening also!

Only 250 tickets are available, so purchase yours while you here:
http://saladoswirl.eventbrite.com/?aff=Facebook 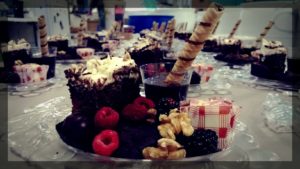 Salado Winery Company will be hosting an Evening of Chocolate and Wine on Friday, September 18th to kick off Salado’s Annual Chocolate and Wine Weekend. From 7:00 – 9:00 pm that evening, guests will enjoy a guided wine pairing with decadent chocolate desserts matched perfectly with each sip of locally produced wine. This is a perfect evening for a date night or a fun girls night out. This relaxing and fun event includes a winery tour and a chance to taste some of our brand new 2015 wines straight from the barrel!

Reservations must be made in advance, as this event typically sells out. Seating is limited to 50 people. Purchase tickets for $44.95 each online at www.saladochocolatefestival.com. 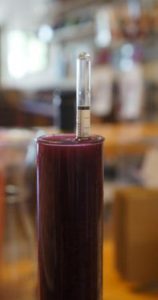 ready to press? (Click on picture to view closer)

The hardest decision for me as a winemaker is trying to decide when to press the red wine.  On one hand, an extended time with the skins could mean more maceration, or in other words, better tannin extraction, richer color and improved flavor, but the risk of spoilage and too much of a good thing weigh heavily on my mind.  I generally press the red wine when all, or nearly all (as seen in the hydrometer picture) of the sugar has been consumed.

Wikipedia.org has a good entry explaining what I am talking about…

“The timing of pressing and the methods used will have an impact on other decisions in the winemaking process. In white wine making, pressing usually happens immediately after harvest and crushing. Here, the biggest decision will be how much pressure to apply and how much pressed juice the winemakers wants in addition to the free-run juice. Some grape varieties, such as Sémillon and Aurore have very “liquidy” pulps that releases juice easily without needing much pressure that could risk tearing the skins. Other varieties, such as Catawba, have much tougher pulps that will require more pressing.[7]

In red wine production the timing of when to press is one of the most important decisions in the wine making process since that will be the moment that maceration and phenolic extraction ceases. Some winemakers use the decreasing sugar level (such as brix measurement) scale and press once the wine has reached complete dryness. Often winemakers will use taste to determine if the wine has extracted enough tannins to produce a balanced wine and may press before complete dryness (such as at 3-8 brix). Though removing the skins by pressing often removes some solids that the wine yeast need to complete fermentation and the benefits of pressing early is often balanced by the risk of potential stuck fermentation.[4]

The quality of the vintage year and the overall ripeness of the harvested grapes may also play a role since in cool years when the grapes are often harvested under-ripe, the tannins in the grape are often very “green” and harsh. In these years winemakers might press early (such as at 15 brix), a process that the Australians call “short vatting”. In warmer years, the tannins may be full ripe or “sweet” and the winemaker may decide to do a period of extended maceration and not press the grapes for as long as a month after fermentation has completed.[4]”

This was found at at http://en.wikipedia.org/wiki/Pressing_(wine)#When_to_press_and_other_winemaking_decisions: 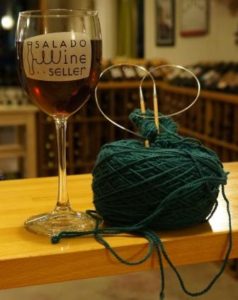 Knit with friends and enjoy a glass of wine!

Join Linda Woznica, from Salado Yarn Co. , for our “Sip ‘n Knit”. Bring your favorite knitting project for a casual gathering of knitters (and crocheters) where everyone brings whatever they are working on and we sit around together and talk, share, help one another, and one other thing – We drink wine! $5/glass of wine will be available.

All levels of knitters are welcome but please keep in mind there are no lessons. Linda will have supplies so you can knit a wine bottle scarf. What? You heard us right, you can make a scarf to keep your favorite bottle cozy. So don’t be shy, come on by!